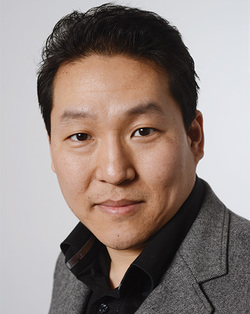 Born in South Korea, Andrea Shin studied in Soul, in
Novara in Italy, at the Mozarteum in Salzburg, at the
Prayner Conservatory in Vienna and at the Accademia
Teatro Alla Scala in Milan. He is the winner of multiple
competitions such as the „Voci Verdiane“ or the
International Hans Gabor Belvedere Singing competition
in Vienna.
From 2011 to 2015,  Andrea Shin was an ensemble member of the Badische
Staatstheater Karlsruhe, where he sang important roles such as Rodolfo, Duca,
Don Jose, Cavaradossi, King Gustav (Un ballo in maschera), Alfred (Die
Fledermaus), Grigory (Boris Godunow) and An Italian Singer (Der
Rosenkavalier).
Shin mastered the roles of Cavadossi and Pinkerton at the Staatsoper Stuttgart,
Edgardo at Oper Dortmund, Florian (Das Testament) and Cassio at the
Landestheater Linz, Faust at the Staatstheater Mainz and Ismaele (Nabucco) at Theater Freiburg.
In 2015/2016, he became an ensemble member of Staatsoper
Hannover, where he sang the roles of Alfredo Germont, Cavaradossi, Duca,
Don Jose, Werther etc. The same season, he also reprised the role of Pinkerton
in Madame Butterfly as a guest at the Oper Stuttgart.

In 2016/2017, he was a cover for three leading roles at the New
York Metropolitan Opera: Romeo, Duca and Rodolfo.
During the last two years, he visited also his home country singing Grigori (Boris
Godunov), Alfredo and Duke at the Korean National Opera and Radames at the
Gwangju City Opera.

In 2018, his Traviata performance was also the pre-opening ceremony of the
Winter Olympic Games.

In 2018-2019, Andrea Shin sang, among other roles, Calaf and
Pinkerton at Opera Dortmund, covered Nadir at the MET and appeared in
several concerts.

In Spring 2019, he embodied Calaf in „Turandot“ at Theater Dortmund, role that he reprises also this season at State Theater Darmstadt and at Oper im Steinbruch in St.Margarethen. Further engagements of the 2019/2020 season: Alvaro in La Forza del destino at the Daegu International Opera Festival.