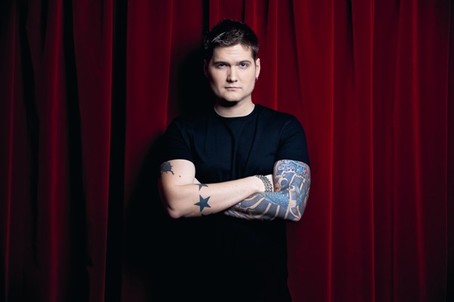 Born in Vaasa, Finland, tenor Joska Lehtinen studied vocals under Matti Pelo at the Conservatory of Helsinki and under the world-renowned tenor Pietro Ballo at the Accademia Lirica del Mediterraneo in Palermo, Italy. In addition he has taken lessons from Salvatore Fisichella and Monika Hauswalter.

Lehtinen made his first solo appearances in Helsinki, Nuremberg, Regensburg, Palermo and Catania. In 2007 he gave a solo concert at the Beniamino-Gigli-Festival in Bologna. In the following year he was a finalist at the Timo Mustakallio Competition at the Savonlinna Opera Festival in Finland as well as the holder of several Finnish Cultural Foundation scholarships.  In 2009 he won the second prize at the International Vilho Kekkonen Tenor Competition in Finland.
Also in 2009 Mr. Lehtinen gave his opera debut as Lindoro in „L'italiana in Algeri“ (Rossini)  in a children's production at the Staatstheater Nuremberg. From 2010 to 2012 he was an ensemble member at the Komische Oper Berlin where his most important roles included Don Ottavio in „Don Giovanni“ (Mozart), Narraboth in „Salome“ (Strauss), Chevalier de la Force in „Dialogues des Carmelites“ (Poulenc), Tschekalinski in „Pique Dame“ (Tschaikowski) and Remendado in „Carmen“ (Bizet).

Since the season 2012/2013 the young Finnish tenor has been self-employed.  He has sang as a guest artist on all the important stages in his home country. In 2012/2013 he successfully debuted  as Janek in „Die Sache Makropulos“ (Janáček) at the Finnish National Opera (with Karita Mattila). As a result Lehtinen became engaged in several other productions at this opera house, for example in Tamino in „Die Zauberflöte“ (Mozart). Furthermore as a guest he sang the role of Don Basilio in „Le nozze di Figaro“ (Mozart) at Opera Tampere and Don Ottavio in Mozarts „Don Giovanni“ in the Alexander Theater.  Lehtinen was then invited to give several solo concerts with the most important Finnish symphonic orchestras.
In 2014 he sang the role of Cassio in Verdi's „Otello“ and Beppo in Leoncavallo's  „Pagliacci“ at the Gut Immling Opernfestspielen.
In 2015 he could be seen as Don José in „Carmen“ (Bizet), as Tebaldo in „I Capuleti e i Montecchi“ (Bellini) as well as Alfredo in „La traviata“ (Verdi). In the fall of the same year he went on to sing the part of the Swan in „Carmina Burana“ (Orff) with the Bielefelder Philharmoniker.
In the 2015/2016 season Joska Lehtinen debuted in the role of Ernesto in Donizetti's „Don Pasquale“ at the Theater Vorpommern. In the fall of 2016 he is seen as Pollione (Norma) at the Staatstheater Mainz.

Recent engagements include a.o. Pollione in Norma at State Opera Mainz, Tamino in Die Zauberflöte at Staufer Festspiele, Cassio in Otello at Moskow Bolshoi Theater, and Edgardo in Lucia di Lammermoor at Theater Ulm, just to name a few.

In 2019/2020, he can be seen as Tichon Kabanov in Katja Kabanova at Theater Magdeburg, Rodolfo in La Bohème, Lenski in Eugene Onegin, as well as in the title role of Faust at State Theater Braunschweig.

He was a finalist at the International Salvatore Licitra Competion 2017 in Milano and won 2nd prize at the 2009 international "Vilho Kekkonen" Tenor Singing Competition in Finland.