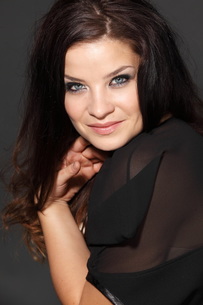 Finnish soprano Marjukka Tepponen began her musical education as a pianist at the age of five.
She had vocal studies from 2000 at the Conservatory of Kuopio and from 2003 at Jyväskylä Polytechnics.  Mrs Tepponen entered the prestigious Sibelius Academy in 2008 and studied there with Marjut Hannula. She  graduated with highest scores in 2012. She has also studied privately in Vienna with professor Hilde Zadek.

Marjukka Tepponen made her operatic debut as Violetta Valery in "La Traviata" (Jyväskylä Opera 2009). Her first appearance at the Finnish National Opera took place in 2010 as Zerlina in "Don Giovanni" and since then, she has sung many remarkable roles on that same stage such as Lauretta in Puccini's "Gianni Schicchi", Corinna in Rossini's "Il Viaggio a Reims", Mimi in Puccini's "La Bohème" and Woman in Poulnec's "La Voix Humaine". Tepponen made her international debut in Graz with the role of Mimi in "La Bohème" (2010). Her further roles have been Pamina in Mozart's "Die Zauberflöte" (Savonlinna 2012 and 2014), Contessa and Susanna in Mozart's "Le Nozze di Figaro" (Turku and Tampere Opera 2013 and 2014), Donna Anna in Mozart's "Don Giovanni" (Rijeka International Opera 2015) and Liu in Puccini's "Turandot" (Bregenz Opera Festival 2015 and 2016).

In 2017-2018, after maternity leave, Marjukka Tepponen appeared as Firodiligi (Cosi fan tutte) at Seattle Opera and the Finnish National Opera, and as Margerite (Faust) at the Savonlinna Opera Festival.

The season of 2018-2019 saw Marjukka Tepponen perform Elisabetta in "Don Carlos" at the Aleksander Theatre in Helsinki, Mona in a world premiere of Jaakko Kuusisto´s opera "Ice" (Jää), and the title role of "Aino Acté" at the Ilmajoki Music festival.

During the last years, Marjukka Tepponen has been singing as a soloist with most of the Finnish orchestras and several European orchestras.
She has held recitals in Finland, Germany, Austria, Japan and the USA.

Marjukka Tepponen has also recorded a lied album "Airs Chantés" with pianist Ilmari Räikkönen (Louhi Productions) and an aria album "Sweet Rapture and Heartache" with Kuopio City Orchestra and Alberto Hold-Garrido (Naxos). She has been engaged to sing in two opera recordings for DECCA in 2016: her roles were Jela in von Suppe's Opera "Des Matrosen Heimkehr" and Marguerite in Gounod's "Faust".​